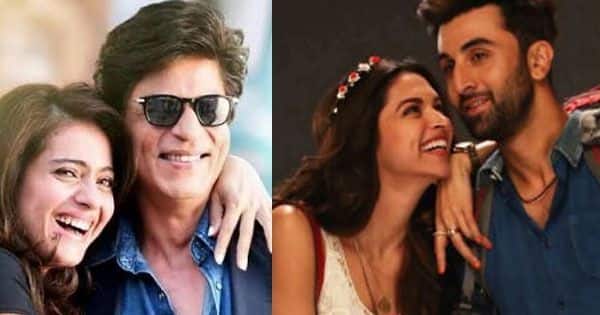 Shah Rukh Khan and Kajol are one of the most iconic pairs of Bollywood and fans have loved their chemistry in films like Baazigar, Kuch Kuch Hota Hai, Dilwale Dulhania Le Jayenge, Dilwale, Karan Arjun, My Name Is Khan, Kabhi Khushi Kabhie Gham and many others. While we still want to see them on the silver screen together, during the promotion of Tamasha, Ranbir Kapoor and Deepika called SRK-Kajol’s chemistry Palangtod. Also Read – Did you know Karisma Kapoor REPLACED Juhi Chawla in these two blockbusters featuring Aamir Khan and Shah Rukh Khan?

Later in another event, when SRK was told react on it, he gave a witty reply and said, “It is very sweet of them. They are great friends, great co-actors. In fact, on the way, I read what they said. It requires a big heart to have this kind of feeling for other actors. Of course, we’ve been there for 20 years. And we’ve tried to create (this chemistry), by chance, actually. Humko toh pata chalta nahi hai, ki hamari khidhki-tod hai, palangtod hai, ghar-tod hai. We’ve never thought it that way. Just because we don’t have this thought in our mind, that is why it appears natural. But having said that, both of them are fantastic too.” Also Read – Pictures of Shah Rukh Khan at YRF and Rakul Preet Singh in a stunning monokini went viral this week

On the work front, Shah Rukh Khan recently started the shooting of Pathan, which also features John Abraham and Deepika Padukone in key roles. Directed by War helmer Siddharth Anand, the film is expected to made on a lavish budget and will be shot in multiple countries. While the official announcement of Pathan is yet to happen, the makers are eyeing to release the film in Diwali 20201. As per the Mumbai Mirror report, a source earlier said, “While the November schedule will be in Mumbai with only SRK, co-stars, Deepika Padukone and John Abraham join him early next year during an overseas stint of the film. It is a battle royale between SRK and John, with Deepika playing an important thread, taking the narrative forward.” So, are you excited for this film? Tweet and let us know @bollywood_life. Also Read – Laal Singh Chaddha: Shah Rukh Khan and Salman Khan to return as Raj and Prem for the Aamir Khan starrer?