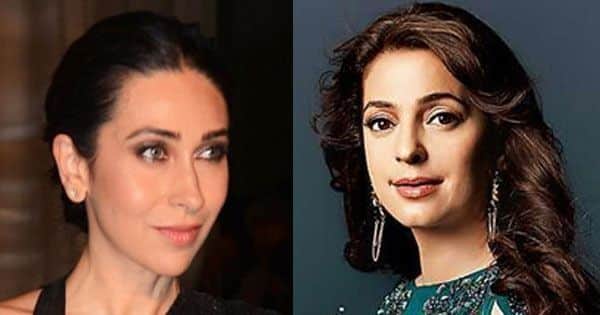 Former Miss India and Bollywood actress Juhi Chawla was one of the biggest superstars of 90s, who gave us memorable performances in films like Hum Hain Rahi Pyar Ke, Darr and many others. While her fans waiting for her comeback on the silver screen, you would be surprised to know that Juhi Chawla rejected two blockbusters and was later replaced by Karisma Kapoor, which featured Shah Rukh Khan and Aamir Khan. Can you guess those films? We are talking about Dil To Pagal Hai and Raja Hindustani. Also Read – Pictures of Shah Rukh Khan at YRF and Rakul Preet Singh in a stunning monokini went viral this week

In a recent interview with E Times, when Juhi was asked that whether she rejected any Yash Chopra film, she replied, “They came to me time and again and they came back to me saying do it. I was like no. This was after Darr. It was Dil To Pagal Hai. Yes, that came to me and then Raja Hindustani came to me.” Also Read – Laal Singh Chaddha: Shah Rukh Khan and Salman Khan to return as Raj and Prem for the Aamir Khan starrer?

When asked which gave her perspective or direction during that time, she replied, “At some crucial point, it was Shah Rukh. Earlier it was Aamir when we were doing films together and all I would run to Aamir. Not because I needed great advice but because I didn’t even know where I was going. Later on, when I started facing loss and you know pain and there was nobody around who knew that feeling. He was the only one in his journey of life who had seen it, so he knew what I was going through. At those moments yes, I remember he kind of said some things to me which calmed me down or at times when it was just very difficult for me when I lost my mum and stuff, when I would go to work with him, he would keep everybody laughing and that was all we needed to forget what had happened.” Also Read – Trending Entertainment News Today – Bigg Boss 14: Devoleena Bhattacharjee takes a jibe at Jasmin Bhasin; Amy Jackson goes topless