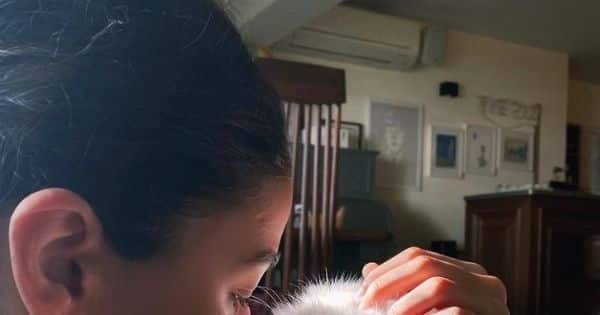 Bollywood actress Alia Bhatt has shared a picture with her pet cat Edward, whom she lovingly calls her muse. Alia posted a picture on Instagram. In the image, the actress is seen holding Edward and looking at him lovingly. “My muse,” Alia captioned the image. Also Read – It’s Awkward! These pics of Tiger Shroff and Mouni Roy will make you laugh like crazy with their hilarious pictures

Alia recently shared that she was missing her sister Shaheen Bhatt, and that has made her look back at moments they spent together. Also Read – Diwali 2020: From Ajay Devgn to Ayushmann Khurrana — 20 actors who made the festival of lights a happy-family affair

The actress has posted a throwback video on Instagram Story that captures her moments with sister Shaheen. Also Read – Thursday Throwback: When Rishi Kapoor had confessed he screwed up his relationship with Ranbir Kapoor

“I miss you so much it hurts,” she wrote with a crying emoji, as a caption to the clip.

Alia shares a close bond with her elder sister Shaheen, and often uses social media to express her emotions for her.
“You’ve already shown the world exactly who you are. There is no introduction for the readers about who the ‘real’ Alia is because the way I see it, there is no secret Alia, no version of you that’s cloaked in disguise,” Shaheen wrote in her letter addressed to the Brahmastra actress.

Shaheen also spoke about the time they spent together during the lockdown. “Through this pandemic and the last few months in lockdown the bright spot in an otherwise bleak time has been the time we’ve spent together. It has been through this time that I’ve watched the sparks of understanding blossom into a full-blown self-realisation. And there is something truly astonishing in that – being a silent observer to the poetry in motion that is someone’s emotional evolution,” she said in her letter.

On the work front, with unlock in place, Alia has shot for Sanjay Leela Bhansali‘s Gangubai Kathiawadi in Mumbai. She is now onto her next, RRR, her mega project down South with Baahubali maker SS Rajamouli. The film stars Ram Charan and Jr NTR along with Ajay Devgn.

(With inputs from IANS)