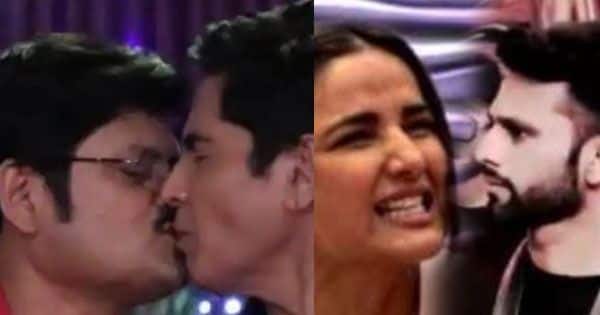 The weekend is here and it is time to look at all those important stories from the telly world. We had some really captivating news updates this week. From Bigg Boss 14’s drama to Bhabiji Ghar Par Hain’s unique kissing scene to Priyank Sharma and Benafsha Soonawalla’s unfollowing game – a lot has happened this week. So, without any further ado, let’s take a look at our list of the TV newsmakers of the week… Also Read – Trending Entertainment News Today: Kajal Aggarwal married, Kumar Sanu on Jaan Sanu’s upbringing, Fatima Sana Shaikh molested

Bigg Boss 14 has been full of drama this week. The show has become quite interesting as we saw the wild cards entering the show. Kavita Kaushik, Shardul Pandit, Naina Singh entered the house. Kavita also became the captain of the house. Jaan Kumar Sanu’s comments on the Marathi language did not go well with Shiv Sena leader Pratap Sarnaik and Maharashtra Navnirman Sena (MNS) leader Ameya Khopkar, who demanded an apology. Jaan Sanu and the channel did apologise. Kumar Sanu also apologised on his son’s behalf and also questioned his upbringing by his mother. On the other hand, it was reported that Aly Goni will also be entering the house as a contestant. We also saw the big fight between Rahul Vaidya and Jasmin Bhasin where she accused him of physically intimidating her during the BB world tour task. She went on to shout and threw water on him. However, many celebrities outside supported Rahul Vaidya and slammed Jasmin for playing the woman card. Also Read – Bigg Boss 14 Weekend Ka Vaar Preview: Salman Khan reprimands Rahul Vaidya, Jasmin Bhasin, Rubina Dilaik till they cry

Bhabiji Ghar Par Hain makes it to our list this week. The show has been the talk of the town for the kissing scene. The show grabbed headlines when Vibhuti Narayan Mishra aka Asif Sheikh and Manmohan Tiwari aka Rohitashv Gaur had a lip-lock scene. The latter had shared a lip-lock picture on his social media handle and wrote: “Abe ye lip lock kaise ho gaya be.Bhabhutiji n Tiwariji are very neech person vo nice hota hai pagli sahi nahi pakde hai. ” Anita Bhabi aka Saumya Tandon had reacted to the lip-lock scene. She posted the see-no-evil emoticon on Rohitashv’s post. Also Read – Bigg Boss 14: Viewers blast Kavita Kaushik for bringing up personal topics about Eijaz Khan’s life

It looks like all is over between Priyank Sharma and Benafsha Soonawalla. The much-in-love couple publicly admitted to their relationship some months back. Now, they have unfollowed each other on social media. Priyank Sharma and Benafsha Soonawalla have deleted all their couple pictures from their social media accounts. This has come as a disappointment for their fans.

Rupali Ganguly and Sudhanshu Pandey’s Anupamaa has been loved since the first episode had aired. The show had topped the TRP charts in the first week itself and has maintained its place in the top two slots. For the past few weeks, the show had maintained its second place on the TRP charts and the first place was grabbed by Shraddha Arya and Dheeraj Dhoopar’s Kundali Bhagya. However, this week Anupamaa took over the first place and Kundali Bhagya had to settle down with the second place. Rupali Ganguly is extremely happy that her show has topped the TRP charts this week. In an interview with ETimes she spoke about the success of the show.

Udaan actress Malvi Malhotra was stabbed by a man on October 26 for turning down his marriage proposal. The accused, Yogesh Mahipal Singh, had met Malvi a couple of times before the incident on the pretext of being a producer, after which he started pressuring the actress to marry him. After she rejected his proposal, Yogesh attacked her thrice with a knife. The incident took place around 9pm on Monday in the Versova area of Andheri when Malvi was returning home from a cafe. Yogesh, who was waiting in a car, stopped her on the way and asked why she had discontinued talking to him. An argument followed, after which he stabbed Malvi with a knife in the abdomen and on both hands, before fleeing. Malvi is currently admitted to Kokilaben Dhirubhai Ambani Hospital and has undergone plastic surgery. She suffered injuries on both hands and stomach.