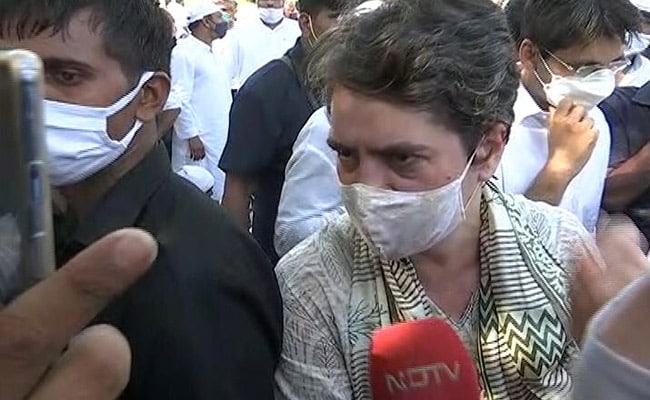 Congress leader Priyanka Gandhi Vadra today said she has “never seen such injustice anywhere” on the gang rape and murder of a woman in Uttar Pradesh’s Hathras. The police had hastily cremated her late at night, away from her family.

“This government has not allowed a father to perform the last rites of his daughter. This is injustice and this is how the government behaves with the people of Uttar Pradesh,” Priyanka Gandhi told NDTV as she and her brother Rahul Gandhi marched on the expressway connect Delhi and Uttar Pradesh.

“I never seen such injustice anywhere,” she said.

“When an incident like this happens, it is the responsibility of the government to support the family, give justice to them. But they did the exact opposite,” Priyanka Gandhi told NDTV.

Priyanka Gandhi and Rahul Gandhi were briefly detained while they were on their way to UP’s Hathras to meet the family of the gang rape victim.

The crime has provoked nationwide outrage.

The woman, 20, died on Tuesday at a hospital in Delhi. She had suffered multiple fractures, paralysis and severe spinal injury when she was assaulted by four upper caste men from her village on September 14. The police said there was a gash in her tongue because she had bitten it when the men were trying to strangle her.

To add to the family’s pain, the UP police took away her body, drove to her village and cremated the body forcibly, with the family locked in their home.

The BJP said Rahul Gandhi’s attempt to visit Hathras was a “photo op”.

“Rahul Gandhi has a track record. Whenever he returns from abroad, he is busy with photo-ops. Today also his march on the expressway was a photo-op. Neither Rahul Gandhi nor Priyanka Gandhi Vadra are sincere in their protests,” UP Minister Sidharth Nath Singh told reporters.