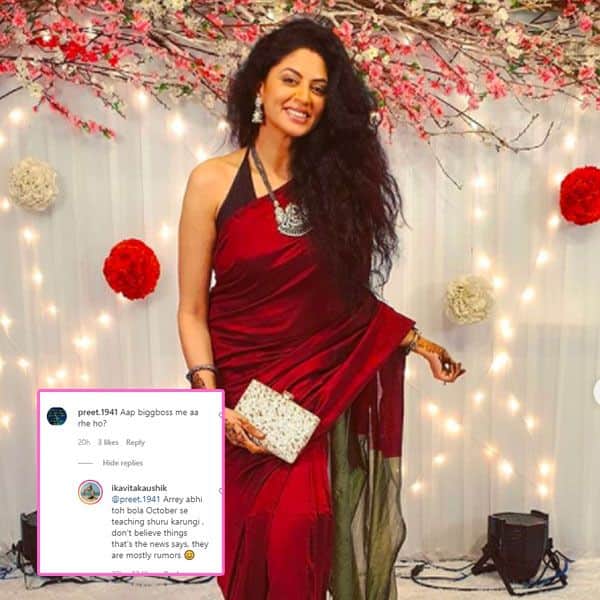 Bigg Boss 14 is coming from October. While some celebs are confirmed contestants, others are in the probables list. One such name that is doing the rounds is that of Kavita Kaushik. Almost every year, there are rumours that the FIR actress will be doing Salman Khan’s show. Many Khabris were reporting that this time she has said an Yes! They reported that Kavita Kaushik would soon go for a COVID-19 test and enter self-isolation phase. All the contestants are being housed in a five-star hotel in Mumbai before they enter the Film City set for the shoot. Sidharth Shukla, Gauahar Khan, Hina Khan and Monalisa have already shot for their promo portions. Also Read – Bigg Boss 14: Kavita Kaushik clears rumours of doing the show, says she’s starting Kundalini yoga classes next month

However, Kavita Kaushik has again denied the news. She has said that she will be teaching Kundalini yoga from October. She posted a pic with her pet cat. She wrote, “He doesn’t come to me so I go to him and sleep in his favorite corner leaving him less option n no room. BTW- Those asking for online classes for Kundalini , we start from mid October, keep your calenders clean ,muscles stretched n spirits high.” Also Read – Bigg Boss 14: Kavita Kaushik to be a part of Salman Khan’s controversial reality TV show?

When someone asked her how would she do the classes if she was going to be locked in, Kavita Kaushik said Bigg Boss 14 was all gossip. She replied, “Arrey abhi toh bola October se teaching shuru karungi , don’t believe things that’s the news says, they are mostly rumors.” The actress is best known as Chandramukhi Chautala from the show, FIR. She has done many Punjabi films as well. Kavita Kaushik has been quite critical of Bigg Boss in the past. Fans will remember how she took a dig when Ramayan got staggering TRPs in the lockdown. She said the public that is crazy over Bigg Boss in normal times has remembered God in this lockdown. Also Read – Trending Entertainment News Today – Farmhouse manager claims that Sushant Singh Rajput was furious; Erica Fernandes, Karan Patel shoot for their last Kasautii Zindagii Kay 2 scenes