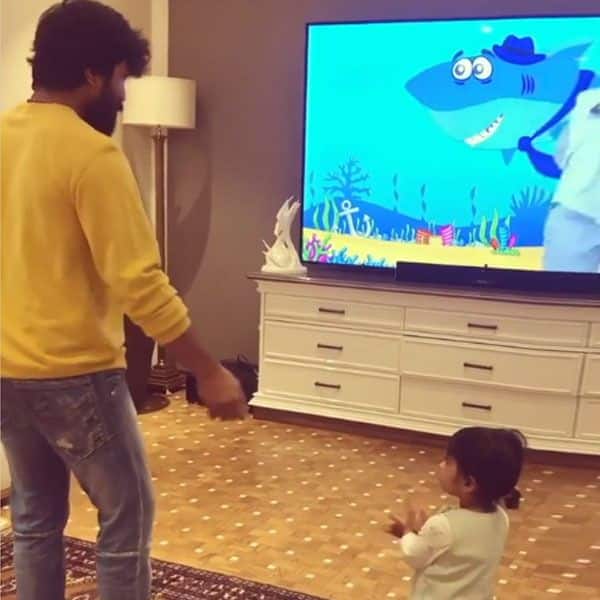 Ram Charan is one of the most handsome and talented actors we have in the entertainment industry. The actor is currently at home, chilling with his family, since the pandemic is still at large and work is yet to resume for some artistes. Due to the continuous spike in the number of patients testing positive for COVID-19, shootings are still on hold for certain films. Meanwhile, Ram Charan is spending time with his near and dear ones. He recently shared a video in which he could be seen dancing with his niece, Navishka, on a children’s song. Also Read – Ram Charan shaking a leg with niece Navishka on Baby Shark song is the cutest thing on the internet today

Ram Charan posted a video of himself dancing with his niece, Navisha, actor Kalyaan Dhev and Sreeja Kalyan’s toddler. Ram is casually dressed in a yellow sweatshirt and faded denim while baby Navishka is attired in a white dress. Ram is seen trying to teach the little one the steps from the video. However, the toddler looks a little conscious as she understands that she is being filmed. It was such a cute sight that we could not zero in on a better video for this week. “Dance off with this darling,” he captioned the video. Have a dekko at the Rangasthalam actor’s post here: Also Read – Tuesday Trivia: Did you know THIS Bollywood actor and not Sathyaraj was the first choice for Kattappa in Baahubali?

On the work front, Ram Charan will be next seen in RRR – Rise Roar Revolt, which also stars Jr. NTR, Ajay Devgn and Alia Bhatt. Baahubali maker SS Rajamouli is directing the period-action-drama which has great hype among the masses. The film was earlier scheduled to release in July this year, but the pandemic delayed their plans. The new date is yet to be announced. Also Read – Say What! Tamannaah Bhatia to host chat show produced by Allu Arjun

A couple of days ago, it was reported that Ram Charan will be next collaborating with Lokesh Kanagaraj of Kaithi fame. While the director is gearing up for Thalapathy Vijay’s Master, the filmmaker has a path-breaking script ready for Cherry. Guess we just have to wait for either of them to make an official announcement. Coming back to the video, we cannot wait to see Ram Charan as a doting father now. Also, we cannot decide who is cuter, Ram or Navishka. What do you think? Let us know by tweeting @bollywood_life .