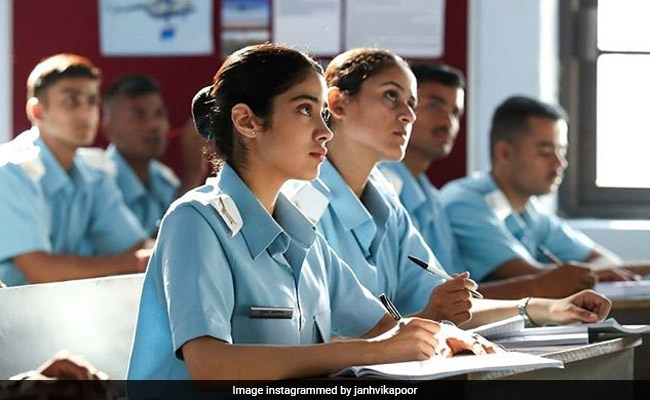 Janhvi Kapoor in a still from Gunjan Saxena: The Kargil Girl (courtesy janhvikapoor)

A week before Gunjan Saxena: The Kargil Girl‘s release, Janhvi Kapoor shared a video titled “becoming Gunju”, which is a compilation of several behind-the-scene moments from the film’s sets. In the biopic, Janhvi features as Indian Air Force officer Gunjan Saxena, who was India’s first woman combat aviator to be commissioned into the war zone during the Kargil War. Gunjan Saxena also stars in Janhvi’s BTS video and talks about Janhvi’s dedication towards portraying her on screen and her disbelief over a film being made on her life and experiences. Janhvi, who introduces Gunjan Saxena as the “first female rescue pilot who went to war” in the video, reveals the one question that the former Air Force officer asked her on the film’s sets.

Talking about a particular day when Janhvi was busy doing retakes for a running sequence, Janhvi said Gunjan Saxena asked her: “Thak nahi jaati aap? Itna kaam kara rahe hain! (Aren’t you getting tired? They are making you work so much!” And this was Janhvi’s reaction to Gunjan Saxena’s query: “And I was like ‘I’m literally pretending to do what you actually did and you’re asking me if I’m getting tired.”

“The honour of playing her character, it’s a huge responsibility,” she added. “She’s done so much for the country and the women of this country, and also even for all of us in the making of this film but in her head she doesn’t think she’s done anything at all,” Janhvi said about gunjan Saxena being an inspirational figure for her.

“The most exciting, motivating and inspiring journey – discovering Gunjan Saxena,” Janhvi captioned the video while Gunjan Saxena added: “The Journey. The memorable journey with Sharan and Janhvi. Loved every inch of that journey with you and your team. Some of the best memories for me to cherish.”

Gunjan Saxena: The Kargil Girl is all set to premiere on streaming platform Netflix on August 12.