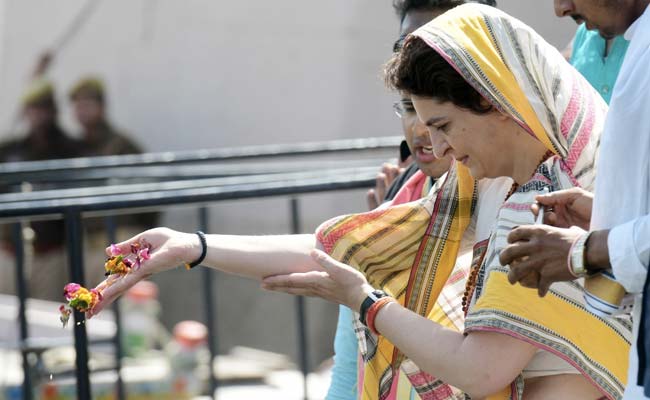 Of the many voices in the Congress’ ear following its electoral mauling in two successive general elections, perhaps the loudest was for the party to course correct and to align itself with the “popular mood” so that it is no longer viewed as opposed to Hindu sentiments.

Commenting on the debacle, Congress President Sonia Gandhi said the BJP had successfully painted the Congress as a “pro-Muslim party”. The ideological shift was first evident in the manner the party came out in support of the government’s move to abrogate Article 370 and then Triple Talaq. The change in strategy is now more pronounced now that the temple has the legal imprimatur of the Supreme Court, there appears to be a conscious effort by the Congress to associate, even at this late stage, with the temple construction at Ayodhya.

In their effort to associate with the temple construction and, more importantly, not to be seen as opposing it, Congress leaders have been reminding people that it was under a Congress government that the locks of the now-demolished Babri Masjid were opened and the shilanyas subsequently performed. Ironically, it was these two events that provided the BJP with the opening to launch  a massive political movement, which it seized. This movement was instrumental in their ascent to power at the centre.

The Congress attempt to take control of the temple movement by allowing the shilanyas backfired and led to the party’s rout in UP in 1989 from which it is yet to recover. Significantly, Priyanka Gandhi’s intervention on the subject is far more nuanced. In contrast is that of former Madhya Pradesh Chief Minister, Kamal Nath, who has sent 11 silver bricks to Ayodhya for the foundation-laying ceremony, and also some of her colleagues who believe that the Congress has paid a huge political price by being seen as opposed to issues like the Ram Mandir.

As the party’s General Secretary in charge of UP, Priyanka has sought to tread the middle path and  reverted to Mahatma Gandhi’s inclusive definition of Ram, and the need to focus on “brotherhood, unity and cultural fraternity”. She is mindful of the fact that the construction of the temple acquired huge emotional support amongst Hindus across the country. Muslims have reconciled to the Supreme Court verdict, though the feeling of injustice does linger; and the vast majority want to put this episode behind them. Priyanka has attempted to challenge the BJP’s monopoly of Lord Ram by trying to focus on the inclusiveness of Ram and his message of humility, sacrifice, compassion, and tolerance.

That notwithstanding, there has always been a large section in the Congress, which from the very beginning has been in favour of the party coming out unequivocally in support of the Ram temple. Prime Minister Rajiv Gandhi encountered this at a closed door meeting with Congress MPs in his parliamentary office where they had been called to work out a strategy to thwart the BJP’s attempt to politically hijack the temple issue. Party MP Lal Munni Chaubey advised Rajiv Gandhi to junk secularism and let the Congress take the lead in the construction of the temple.

So, the Congress approach to the Ram Mandir has been muddled from the very beginning. It first allowed the opening of the gates and later, the shilanyas at the disputed site in the hope that it would get all the credit and wrest the movement from the hands of the BJP. The PV Narasimha Rao-led government watched helplessly as the Babri Masjid was demolished in broad daylight on Dec 6, 1992. This brought about a seismic shift in the country’s politics towards the right, and paved the way for the BJP’s rise to power across the country and the Centre.

Under UPA 1 and UPA 2, the Congress did make a conscious attempt to woo back its vote bank but the BJP was quick to pounce on this, and has consistently accused the Congress of favouring the minorities at the cost of the majority community.

Under Indira Gandhi, the Congress was always conscious of its Hindu roots; she always wore her Hindu identity on her saree. This is one reason why the BJP failed to maker any headway while she was alive. Then Rajiv Gandhi kept his links with the Hindu clergy and was careful not to alienate the majority community. However, it was under Sonia Gandhi that the party adopted a hard secular stand, which the BJP promptly portrayed as anti-Hindu.

The Congress’ AK Antony Committee, which was set up to look into the reasons of the party’s defeat in 2014, also underlined the fact that the Congress was increasingly being viewed as a pro-Muslim and anti-Hindu party. This image, as well as a spate of electoral reverses, appear to have compelled the Congress  to do a rethink. The attempt at course correction began during the assembly elections of Madhya Pradesh, Rajasthan and Chattisgarh with Rahul Gandhi’s well-publicised temple visits. Now, other party leaders are doing their bit, some more stridently than others. Kamal Nath claims that he has been a Hanuman bhakt and supports this by claiming to have built in his Lok Sabha constituency of Chhindwara the biggest Hanuman temple ever.

The Congress believes it is now time to rediscover its his Hindu roots, and challenge the BJP’s image as being the sole representative of Hindus and also come up with a narrative and definition of Hinduism that is unifying, peaceful and tolerant.

(The writer is a senior journalist and political analyst.)