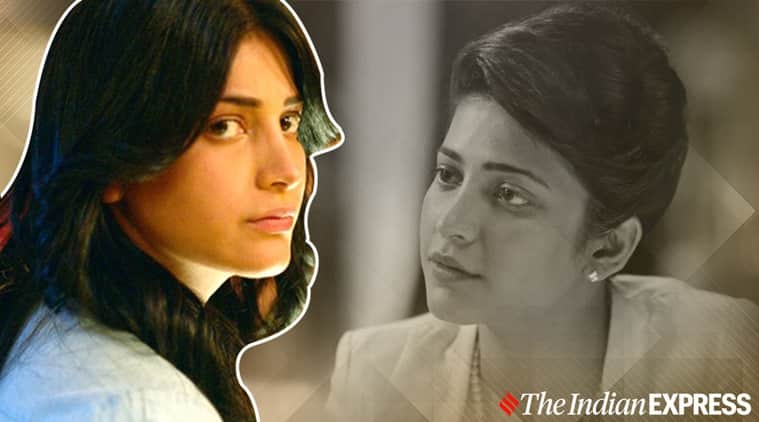 Actor Shruti Haasan kept busy during the lockdown making music, cooking and writing. And amid all this, she is also gearing up for her upcoming film Yaara, which is set to release on ZEE5 on July 30. Shruti is kicked about the movie because this is also the first time she is playing an older woman on screen.

Yaara has been directed by Tigmanshu Dhulia and also stars actors Vidyut Jammwal, Amit Sadh, Vijay Verma and Kenny D Basumatary. A remake of 2011 French movie Gang Story, Yaara revolves around the friendship of four criminals – Phagun, Mitwa, Rizwan and Bahadur – who are part of the Chaukdi Gang. It traces their rise and fall.

In an exclusive chat with indianexpress.com, Shruti Haasan opened up about playing the only female character in Yaara, working with Tigmanshu Dhulia for the first time and her new YouTube channel.

Here are excerpts from the conversation:

Q. How important is your role in a film that basically involves four boys.

Most films are about boys, aren’t they? (Laughs) In this case, it’s a really pivotal character. My character Sukanya comes in and lends different energy to the film.

Q. How was it being the only girl on the set?

Q. Is Sukanya manipulative or an emotional thread in the film?

She’s not manipulative at all. She’s very strong and opinionated, and the love she has for Phagun (Vidyut Jammwal) is very real and deep throughout the story.

Q. You are being directed by Tigmanshu Dhulia for the first time. Tell us more.

Tigmanshu sir has an understanding and appreciation for artistes in general, whether he’s directing or acting. Working with him was really a memorable experience.

Q. The film is set in the 70s, and you are also paying an elderly character in a portion of the story. How’s that experience?

This is the first time I’m playing a woman older than my age. There is very little prosthetic work because I didn’t really know how to go about it. Tigmanshu sir and I discussed a lot. I decided to call my dad. I felt like he would be the best to give advice. The great thing he said is, just look at your mom’s face and my face and see how we’ve aged. I realised they haven’t really aged! So to play a woman in her forties was damn difficult in that visual sense. As far as the emotion goes, it was really interesting to try and analyse what would Sukanya become 10-15 years later. This journey for me as an actor was very exciting.

Q. You have worked in projects across languages, and now, across mediums. Has each platform brought any change in your craft?

I don’t think you go on the set thinking this is going to come out on this particular OTT or a theater or a TV channel. Your work is work. But I do think these OTT platforms have brought different kind of content easily to more people.

Q. You’ve launched your YouTube channel. How excited are you?

It has the original music that I’ve been making and my performances from London because a lot of people kept wondering where I kept going. I was putting little bits on Instagram, but I wanted to collectively have a place for people to go and see my original English music which I’ve been performing.