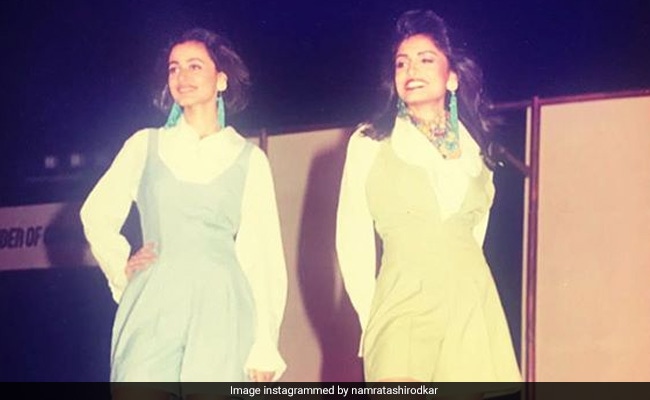 A photo of Namrata from the pageant. (courtesy: namratashirodkar)

Actress Shilpa Shirodkar shared a throwback video from her sister Namrata Shirodkar’s Miss India days on her Instagram profile on Wednesday. Namrata, who won the pageant in the year 1993, was one the favourite contestants of the judges. Former Miss India Sangeeta Bijlani, who also featured in the throwback video, said that she was rooting for Namrata Shirodkar. During one of the rounds of the pageant, the top five contestants were asked different questions. The question that Namrata was asked was: “If you woke up one morning and found Count Dracula sleeping in your bed, what would you do?” She replied, “Well, I would be really frightened but then I would make friends with him.”

Namrata Shirodkar is best-known for her performances in Hindi movies like Kachche Dhaage, Pukar, Astitva, Albela and Dil Vil Pyar Vyar. She has also featured in Kannada, Telugu and Malayalam films. She also featured in 2004’s Bride And Prejudice , co-starring Aishwarya Rai Bachchan.

Namrata Shirodkar is married to Telugu superstar Mahesh Babu, whom she met while filming 2000 film Vamsi. They started dating after the film opened in theatres and got married in 2005. They are parents to son Gautham and daughter Sitara. Namrata Shirodkar hasn’t featured in a film after getting married. Her last onscreen appearance was in Telugu movie Anji.