The Desi Girl of Bollywood and Global Icon, Priyanka Chopra shared a wish for brother-in-law Joe Jonas and wife Sophie Turner on their first wedding anniversary. The Sky Is Pink actress shared the picture of duo’s french wedding on her Instagram story and wrote, “Happy 1 year anniversary! Love you both.” The singer recently revealed his plans to celebrate his first wedding anniversary with actress Sophie Turner. “I think we would have gone back to Vegas,” he told host James Corden, reports eonline.com. “So, if you can keep a secret, I would say I might try to recreate Vegas in our house.” Also Read – From turning barbers to clicking candids, here’s how Bollywood couples have given us couple goals in times of Coronavirus 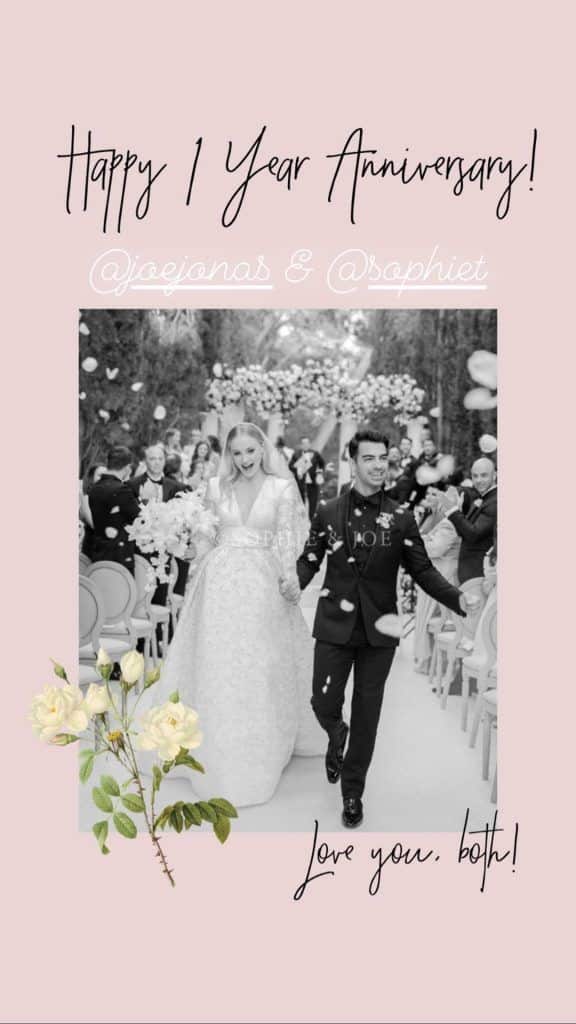 Also Read – When Priyanka Chopra addressed on nepotism and said, ‘I was kicked out of films because someone else was recommended to the producer’

Joe and Sophie are expecting their first child as recently we saw the Game Of Thrones actress flaunting her baby bump. Recently, Joe shared the reason behind his spontaneous wedding with Sophie as he told at GQ’s “Actually Me” series, “So we thought it would be really fun to get all of our friends, invite them out (to Vegas), and do an impromptu wedding,” he explained. “And we actually had some people that I didn’t even know that well there. Some people (in attendance) I am now closer with! Khalid was there! That was cool. And Diplo decided to livestream the whole thing.” Also Read – #JusticeforJayarajAndFenix: Priyanka Chopra, Anushka Sharma, Parineeti Chopra and other celebs react on the horrific Tamil Nadu deaths

He went on to reveal that he forgot to tell his parents about the marriage. “My parents called me the next morning and they were like ‘Did you just get married?’ And I realised that I told everybody, but forgot to tell my parents. So, kids, make sure you tell your parents when you’re getting legally married!” The popstar recalled old memories and said, “We used to be the couple that every few days we would celebrate. So, it’d be like, we’ve been dating for a week, we’d have a party or a big dinner. We’ve been dating for a month…and we were that nauseating couple,” adding, “Now, I think we’ve chilled out quite a bit.”