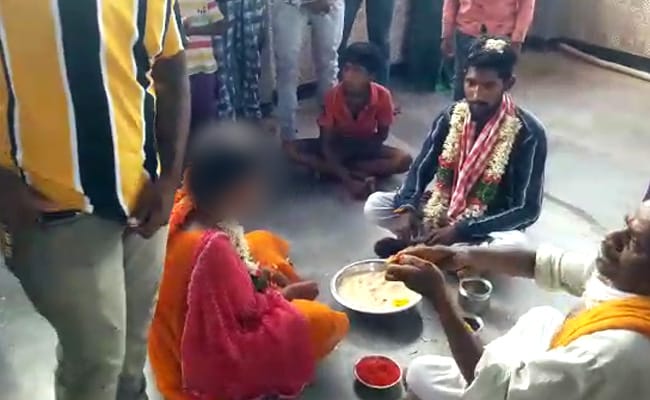 At least 30 people attended the wedding at the Matha Temple in Medchal district.

A 16-year-old girl in Telangana was married to a 23-year-old man on June 1, prompting child rights activists to demand penal action against the priest, the bride and groom’s parents and the groom.

Cases under child marriage prevention Act, POCSO, sections of IPC relating to rape (376) forcing or inducing minor to marry (366) have been filed against the groom, parents of both the bride and groom as also village elders including a local politician.

Activist Achyutha Rao of Balala Hakkula Sangam that reported the case had demanded penal action against the priest, the bride and groom’s parents and the groom.

The marriage was solemnised by a priest at the Matha Temple in Medchal district’s Kandlakoya near Gundlapochampally, some 30km away from Hyderabad.

Though the FIR says the girl is 16, the child rights activist said she was in fact a pre-teen who is in sixth class and had reportedly attained puberty about a month ago. The groom, identified as Raju, is a construction site worker.

Videos accessed by NDTV suggest that a priest solemnised the marriage ceremony and at least 30 people attended the wedding.

While weddings can be attended by a maximum of 50 people with social distancing and other Covid safety norms in place, the video shows guests gathered around the couple without face masks.

It could not be ascertained if the temple was opened only for the occasion as all places of worship in the state remain shut in view of the coronavirus lockdown. Places of worship are likely to be opened June 8, as per the guidelines issued by the Union Ministry of Home Affairs under Unlock 1.0 – a phased easing of restrictions.

“Cases should be filed under relevant sections of the POCSO (Protection of Children from Sexual Offences) Act and Section 376 of the Indian Penal Code for rape as the marriage was reportedly consummated,” Achyutha Rao said.

Despite laws in place, child marriage is rampant in Telangana, say activists.