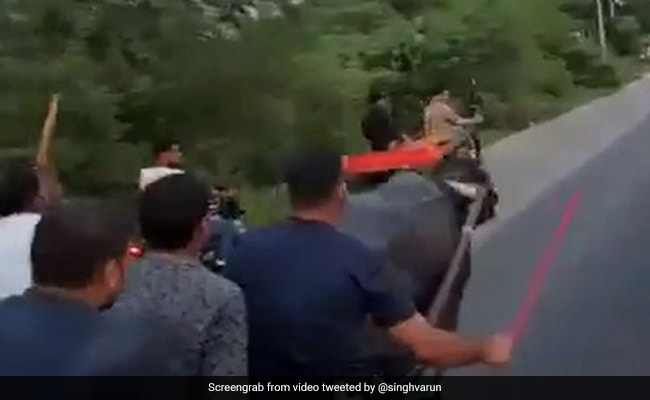 A buffalo’s revenge on “inhuman” riders has gone viral on social media.

An old video that has resurfaced on the Internet shows a buffalo exacting revenge on people riding a cart it was pulling. The video shows five men sitting on the buffalo cart, with two of them raining blows on the animal and forcing it to run faster and faster as the others cheer. While the shocking display of animal cruelty left many viewers aghast, the buffalo did manage to get sweet revenge in the end.

Possibly disturbed by the constant blows it had to endure, the buffalo steers to the right and hits a divider in the middle of the road, overturning the cart. As the five men fall down the cart and hit the road, the buffalo scrambles away quickly, free of its load. The video ends with the men getting up and dusting themselves off.

“The buffalo took a perfect revenge, such people shouldn’t be called human,” wrote Twitter user Varun Singh while sharing the video on Saturday. You can watch the video below:

(Disclaimer: Viewer discretion advised. Video contains language that is not suitable for children.)

The buffalo took a perfect revenge, such people shouldn’t be called human. pic.twitter.com/6o1n3LQdQ7

Since being posted on the microblogging platform, the case of instant karma has gone viral with over 5.5 lakh views and nearly 34,000 ‘likes’. Many in the comments section criticised the people riding the cart as “inhuman” and suggested that they be booked for animal cruelty.

“This was eerily satisfying,” wrote one Twitter user while reacting to the video. “As you sow so shall you reap,” said another.

What do you think? Let us know using the comments section.