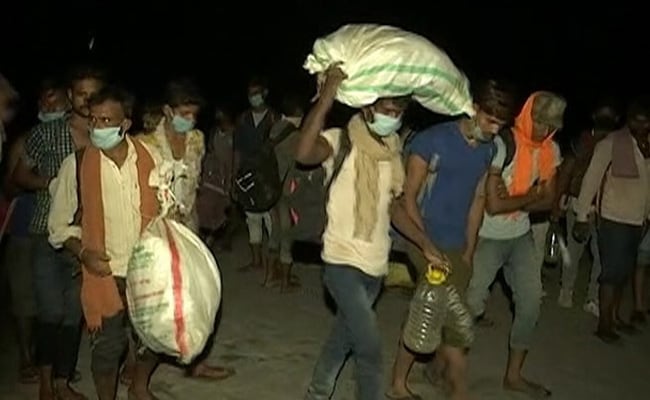 Yamuna: People from nearby villages say they have been giving food and water to the migrants

Hundreds of migrant workers, some carrying bags on their heads, have been crossing the Yamuna river on foot at night from Haryana to go home in Bihar. The river flows along the Uttar Pradesh-Haryana border.

The migrants have been crossing the river, whose water level is low in peak summer and before monsoon, from Yamunanagar in Haryana to reach to UP’s Saharanpur, from where they are headed to Bihar.

The centre is running special “Shramik” trains for migrants, but hundreds of them who have not found transport continue to walk home.

“We didn’t have money, police thrashed us on the road. That’s why we are crossing the river at night. I will walk till Bihar,” says 16 old-year-old Rahul, who worked as a wage worker at a plywood factory in Yamunanagar. He holds on to his belongings and wades through the black water slowly.

Another migrant, Rakesh, 24, who worked as helper in Ambala, says he was sacked by his employer and he has no money left. He stayed at a shelter home in Yamunanagar, but he was not getting food. “I decided to walk home after that,” he says.

There is no police deployment on the riverbank from where the migrants are coming into the river. Many of the migrants said they haven’t got much food left and most of them are hungry.

People from nearby villages say they have been giving food and water to the migrants. The Sharanpur police have been informed of the migrant movement and the administration has said they will arrange transport for the migrants to reach their villages in Bihar.

For now, many of the migrants are staying at a shelter home in Sharanpur, 190 km from Delhi.