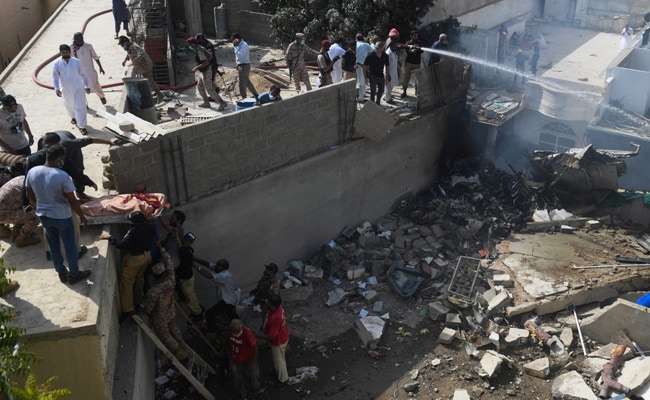 PIA crash: The wreckage and several houses in the area were on fire, visuals by Pakistan media showed.

A Pakistan International Airlines flight from Lahore, with 91 passengers and seven crew on board, crashed near the Karachi airport, just a minute before the Airbus A320 was to land this afternoon. In the final moments before the crash, recorded on a flight tracking website, one of the pilots can be heard telling the Air Traffic Controller that they had lost both the engines, before sending the international distress message, “Mayday, Mayday, Mayday“.

While the exact number of casualties is not known yet, one passenger did survive the crash, news agency Reuters reported. The passenger, a banker, said at the hospital, “Thank you so much. God has been merciful”, according to Reuters.

The PIA flight PK-8303 went down in a densely populated residential area – Jinnah Garden area near Model Colony in Malir – just short of the Jinnah International Airport. “The plane first hit a mobile tower and crashed over houses,” an eyewitness was quoted as saying.

The wreckage and several houses in the area are on fire, visuals by Pakistan media showed. Plumes of smoke could be seen billowing in the sky as ambulances tried to make their way through.

Dark plumes of smoke seen near the crash site. #PIA#ModelColony#MalirCantt#Karachipic.twitter.com/bLBCmG1dXf

The crash comes just days after Pakistan began allowing commercial flights to resume after planes were grounded due to the lockdown over the coronavirus pandemic.

Pakistan Prime Minister Imran Khan said immediate inquiry will be instituted in the crash. “Shocked & saddened by the PIA crash. Am in touch with PIA CEO Arshad Malik, who has left for Karachi & with the rescue & relief teams on ground as this is the priority right now. Immediate inquiry will be instituted. Prayers & condolences go to families of the deceased,” he tweeted.

Pakistan media reported that Pak Army Quick Reaction Force and Pakistan Rangers are at the crash site to assist in relief and rescue efforts, which have been hindered due to the presence of a large crowd and narrow lanes.

Karachi and Lahore are about 1,020 km apart and it takes under two hours for a flight to cover the distance.

In 2016, a Pakistan International Airlines plane burst into flames after one of its two turboprop engines failed while flying from the remote northern to Islamabad, killing more than 40 people.

With inputs from agencies