Review: ‘What Are The Odds?’ Doesn’t Tick Boxes, It Reinvents Them 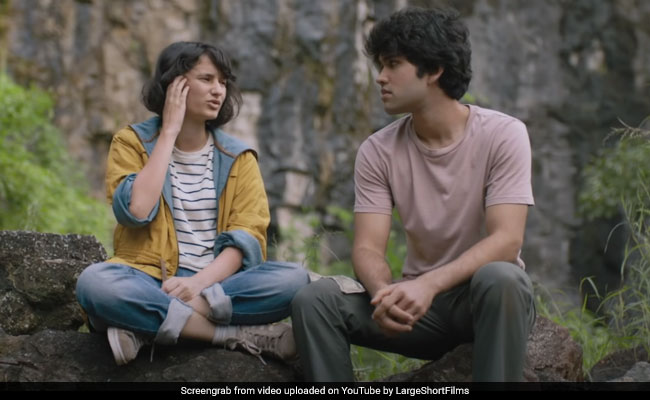 What Are the Odds? review: A still from the film. (courtesy: YouTube)

A character in What Are The Odds?, now streaming on Netflix, lives in the hope that it will snow in Mumbai one day and she isn’t the only oddity in this deliciously enigmatic drama about the joys and pitfalls of the years that bridge the end of childhood and the onset of adulthood.

Among other wondrous elements, the film has a goldfish that communicates in the voice of Jugal Hansraj, an actor forever frozen in our collective memory as the nine-year-old boy from 1982’s Masoom. The film beckons you into a world where there is magic aplenty and there is the undeniable delight of stumbling upon heady tricks that only pure innocence can inspire.

This is fairy-tale Mumbai. Here, you are just as likely to run, in an elevator, into a ‘Birdmom’ (Rajshri Deshpande in a cameo) with a child in avian guise in her arms, or into a man named Rimpu (Manu Rishi Chadda) who covers his red track suit with a tree outfit during a foray into a forest so as not to scare the animals away.

What Are the Odds? is the sort of film that, if you are able to catch its rhythms and heartbeats, could have you trilling like a skylark! Sagar Desai’s music will certainly help you along, as will the easy charm that the young leads, Yashaswini Dayama and Karanvir Malhotra, bring to the table. Rarely has a Mumbai film addressed the theme of youth navigating the path to adulthood so delicately, so captivatingly and in such a refreshing manner.

Let us return to the piscine creature we mentioned earlier. It starves one minute and asphyxiates on food the next. It draws two diametrically dissimilar youngsters – a teenage girl ill at ease with conformity and a well-mannered school head boy who detests being out of step. What are the odds that the attributes of one will rub off on the other and initiate life-altering changes in them, individually and as a couple?

Writer-director Megha Ramaswamy, who co-wrote Shaitaan a decade ago and then made a pair of acclaimed short films, Newborns and Bunny, brings a unique sensibility to bear upon this whimsical coming-of-age tale that packs an array of ideas into its 90 minutes.

What Are The Odds? examines the repercussions of an impulsive act of protest, the first stirrings of youthful love (articulated in a manner that is as unusual as everything else in the film), the connection, or the lack of it, between age and maturity, and, of course, adolescent awkwardness that triggers intense struggles as much as it engenders great derring-do.

In her narrative feature debut, Ramaswamy conjures up a construct in which the magical co-exists in perfect harmony with the commonplace. The female protagonist (Dayama) is called Vivek, like or lump it. One fine day, she decides to give a Hindi proficiency exam a miss. Ashwin (Karanvir Malhotra) is inadvertently dragged into her rebellious plan. The rest of the day isn’t all fine, but it certainly is filled with revelations, confrontations and moments of wonder as the two weave their way in and out of spots of bother.

In one scene late in the film, Ashwin gives Vivek a mouthful: Do you think breaking rules gives you an “existential purpose” in life? The girl is at a loss for an answer. Existence is cloaked in mystery and purpose is an elusive bird. But miracles do happen when they seem least likely.

But What Are the Odds? is always more interested in the questions and in the search for the answers than it is in the answers, which, the suggestion is, will sort themselves out anyways. Like the fading portrait of Oscar Wilde hanging on a wall in the girl’s home – the boy not only wonders aloud if the man in the picture is her missing dad but also suggests that she looks like him – the film frequently, and defiantly, flirts with the unexplainable.

What is a framed photograph of an Irish writer doing in a Mumbai home? Well, no more than what a granny (Sulabha Arya) who has been knitting a sweater for 12 years, a 40-year-old rockstar Valmik ‘Val’ Burman (Abhay Deol) who fronts a band called The Kapoors, a “scientist-artist” Paloma (Priyanka Bose), who is an 18-year-old boy’s lady love, or a stylist (Monica Dogra) who is barely able to explain to Vivek what her profession is really about are doing in the film.

Wilde is anything but a wild insertion. His presence not only has a bearing on a plot detail unveiled late in the film, it also tangentially evokes the beauty of Dorian Gray (the key figure in the writer’s lone novel) that survives the ravages of time even as his portrait ages. For both Vivek and Ashwin, age is no bar. The former has a crush on Val. The latter “dates” Paloma, a much older woman. Neither feels there is anything odd in there.

What Are the Odds? has a dreamlike quality that is frequently at variance with the pangs of growing up that the two young protagonists must reckon with. Barring the sequences in the film’s third chapter (it has four in all), in which Vivek sends mixtapes to Val and seeks validation for her talent, the story, narrated by Val himself, unfolds in the course of a single “gair mamooli” day.

The film isn’t mamooli (ordinary) either. It adroitly breaks free from generic constraints and presents the storm raging in two young minds in a subdued, meditative way that yields much more than normative methods would have. The tone is in consonance with the little but profound struggles of a gifted but withdrawn girl not to let the world push her into a box.

What Are the Odds? doesn’t tick boxes. It reinvents them. In the process, it trades superficial dazzle for a deep, lasting enchantment.