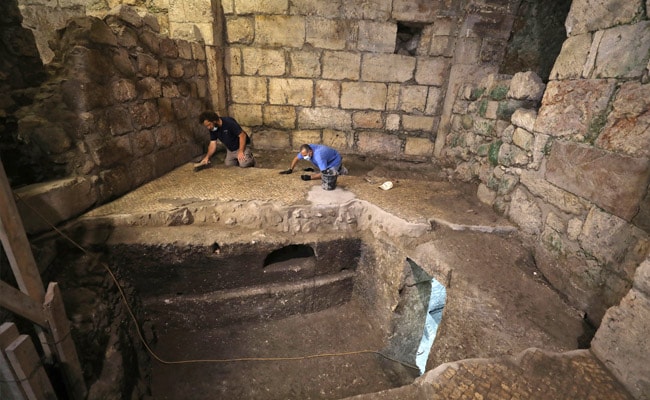 Israeli researchers on Tuesday unveiled mysterious underground rooms with an unknown function, carved out of the bedrock near where the Second Jewish Temple is believed to have stood two millennia ago.

The discovery was made when Israeli students from a pre-military college were excavating a large, lavish Byzantine-era structure from some 1,400 years ago, below the Western Wall plaza in Jerusalem’s Old City.

Like other sites inhabited for millenia, parts of Jerusalem contain deep layers of archaeology, the result of societies building on top of earlier structures rather that expending resources to clear ruins.

“At first we were very disappointed because we found we hit the bedrock, meaning that the material culture, the human activity here in Jerusalem ended,” said Barak Monnickendam-Givon, co-director of the excavation for the Israel Antiquities Authority.

But upon further examination, the researchers came across a “very big surprise,” he said.

“What we found here was a rock-cut system — three rooms, all hewn in the bedrock of ancient Jerusalem,” and connected via staircases, Monnickendam-Givon said.

He dated the rooms to the early Roman period and noted the rarity of such structures in Jewish cities then.

The find is “about 30 metres from the Temple Mount,” where the Second Jewish Temple, destroyed by the Romans in 70 AD stood, he said, and contains elaborate carvings and niches, including for the many oil lamps that would have been used for light.

The Temple Mount, Judaism’s holiest site, now houses the Haram al-Sharif compound, the third-holiest site in Islam that includes the Al-Aqsa mosque and Dome of the Rock.

While researchers have not yet determined the function of the rooms, Monnickendam-Givon said they could have been underground food storage for a building that “didn’t survive.”

Or they could also have been a separate facility for preparing food for the city’s priests or the temple’s pilgrims and visitors.

“We’re finding cooking vessels used to cook daily meals, oil lamps, storage jars that people (used to) store their wheat and barley or olive oil here,” he said, noting they “don’t have any firm link to the temple itself.”

The excavation was part of a larger project to create an underground expanse showcasing various eras and finds, while prayers continue above at ground level.

“There’s a general plan here that all of what’s now the Western Wall plaza will stand on columns and we’re going to excavate below,” Monnickendam-Givon said.

“There’ll be a division between the liturgical activity, where people are praying, and tourists who will walk here with the archaeological findings,” he said.

Debt Relief Initiative For Poorest Nations Can Be Extended: G7