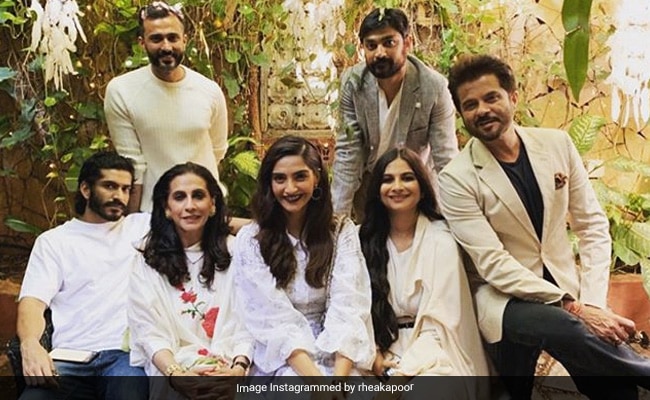 No, guys, Harshvardhan Kapoor is not photoshopped into the post shared by his sister. Rhea Kapoor had to edit her initial caption and add a disclaimer clarifying that’s the real Harshvardhan and not a superimposed one in the Kapoors family photo she shared as a greeting on Anil Kapoor and Sunita Kapoor’s wedding anniversary today. In the photo, Sunita and Anil can be seen posing with Sonam Kapoor and her husband Anand Ahuja, and also Rhea and her boyfriend Karan Boolani. Harshvardhan, sporting a straight face, can be seen sitting at one corner of the garden couch and appears visibly uncomfortable. Within minutes of Rhea’s post, her Instafam started posting comments such as “Hardhvardhan looks photoshopped”, “Is that really Harsh? I think it’s photoshopped, to be honest” and “Why does Harsh look like he has been superimposed?”

Teasing her brother, Rhea added this bit to her initial caption wishing her parents: “PS – Harshvardhan isn’t photoshopped. He just has that energy. But I wouldn’t put it past him to make that request.” The photo in concern is the last entry in the album – swipe to see.

The photo shared by Rhea was originally Instagrammed by Anil Kapoor in January last year when the Kapoors celebrated the first Sunday of 2019 together. “A happy Sunday with the only humans that make me feel all warm and fuzzy inside… Celebrating yet another beautiful love story!” Sonam and Rhea, who were holidaying in Bali for the New Year, returned to Mumbai just in time to celebrate the first weekend of 2019 with their parents.

Harshvardhan Kapoor, who prefers a regulated social media presence, made his Bollywood debut with 2016 film Mirzya. He also starred in Bhavesh Joshi Superhero next and will next be seen in the untitled biopic on Abhinav Bindra.