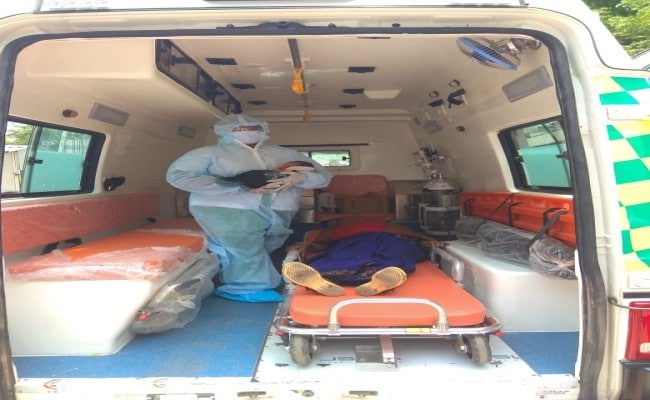 A woman migrant worker on Sunday gave birth to a girl onboard a Shramik special train headed to Bilaspur in Chhattisgarh from Bhopal in Madhya Pradesh, health officials said.

The woman, Ishwari Yadav (23), delivered the baby around 1.50 am with help of other women passengers on the train before it reached Nagpur in Maharashtra, her husband Rajendra Yadav told PTI over phone.

“She went into labour at midnight, following which I called the railway helpline number. The helpline staff said doctors will reach once the train arrives at the nearest station, which was far from where we were,” he said.

“Then I started asking other women passengers travelling on the train if they could help me and they agreed,” he said.

The delivery happened safely with the help of the other women on the train, Mr Yadav added.

“When the train reached Nagpur station around 4 am, a railway medical team arrived and helped us. They removed the umbilical cord and clamped it. Doctors also gave some medicines to my wife,” he said.

“After arriving at Bilaspur at 10:55 am, the mother and the newborn were rushed to Chhattisgarh Institute of Medical Sciences (CIMS) in the city in an ambulance,” Public Relations Officer of the institute, Dr Aarti Pandey, said.

Both of them have been kept in the isolation ward and they are fine. The rapid testing of the woman for coronavirus came out negative. However, her sample has been sent for RT-PCR testing for final confirmation, she said.

Mr Yadav, a native of Dharampura village in Mungeli, said he had gone to Bhopal in March to work as a construction labourer along with his pregnant wife and an infant daughter.

“Unfortunately, only three-four days after I started work, lockdown was imposed. It was very difficult to arrange for food and other essentials for two months. I borrowed money from my contractor and others. Sometimes we had to manage with just water as there was no food,” he said.

“The horrific experience of lockdown will continue to haunt me,” he added.

“As my wife’s delivery date was nearing, I tried many times to return home on goods vehicles, but failed,” he said.

Finally I boarded the special train at Habibganj station with the help of other labourers of my area who were also there, and finally reached home, he added.