While Yash Gave KJo Hair Advice, Deepika Spotted Someone Else In Frame 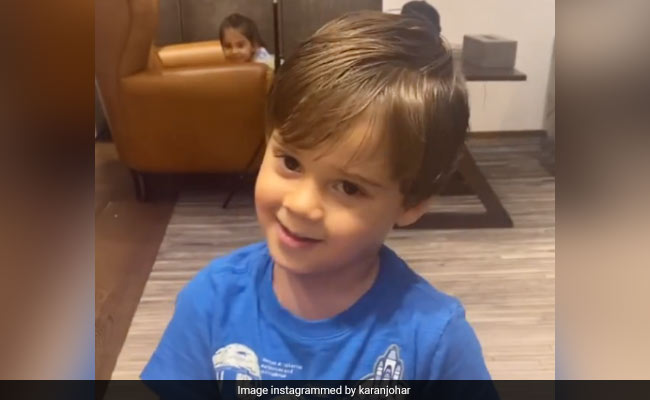 Yash in a still from Karan Johar’s video (courtesy karanjohar)

Karan Johar’s “lockdown with the Johars” videos are our daily dose of cuteness and fun. On Sunday, little Yash featured in a video on Karan Johar’s Instagram in which he can be seen sharing ROFL haircut ideas with his father. Yash, who said he “just got a haircut”, pointed towards a container of medicine, saying that’s the haircut equipment KJo needs now. While Yash’s suggestions cracked up KJo and the video ended there, Deepika Padukone spotted someone else in the frame that many of us may have missed. “Please watch Roohi lurking in the back,” Deepika commented with the ROFL emojis. Following Deepika’s comment, we went back to watch the video again and spotted KJo’s daughter Roohi roaming around in the far end of the room, staring into the camera. Aww. 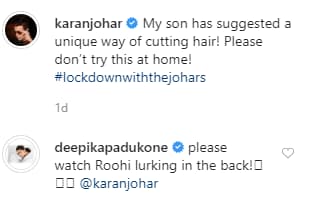 “My son has suggested a unique way of cutting hair! Please don’t try this at home,” KJo Instagrammed the video with this caption.

Roohi and Yash are absolutely adorable and hilarious with their playful antics in Karan Johar’s “Lockdown With The Johar” videos and they are turning out to be quite filmy as well. In a recent entry, Yash was asked about the country he lives in and he said “Amitabh Bachchan and Shah Rukh Khan.” LOL. “Part quiz! Part school memories! PS – don’t miss his answer about his country,” KJo captioned his post.

Roohi and Yash get their daily dose of Bollywood from Karan Johar, who begins the day with a morning dance routine to Aankh Marey. “We started the morning with a dance performance! Watch me being dragged to the dance floor,” KJo wrote while sharing the dance video.

Karan Johar became a single parent when Roohi and Yash were born via surrogacy in 2017. On the work front, Karan Johar will be directing the much awaited period piece Takht next.