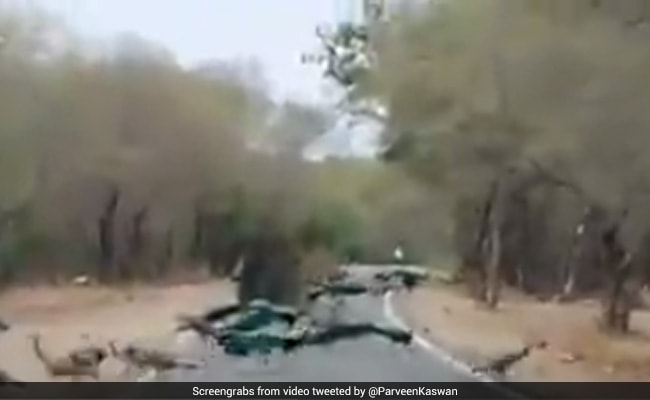 In the video, several peacocks can be seen spreading their feathers.

Amid a spike in vehicular traffic in parts of the country today after a widespread relaxations in lockdown curbs, a video of an unexpected traffic jam is going viral on social media.

A video has been shared on Twitter by Indian Forest Service Officer Parveen Kaswan, wherein a flock of peacocks can be seen on a deserted road, causing an “amazing traffic jam”.

In the video, which has got 1,24,000 views so far, several peacocks can be seen spreading their feathers and hurrying down the road as a vehicle approached them.

Several people responded to the tweet with their own wildlife spotting amid the lockdown.

“Wow…. such a interesting and pleasing traffic jam….don’t mind getting stuck for hours,” wrote one Twitter user. “Kind of traffic jam I wouldn’t mind. Our national bird is so gorgeous,” wrote another

Though the exact location of the peacock spotting is not known, Mr Kaswan said, it was from somewhere in Rajasthan.

India has been under a nationwide lockdown since March 25 to contain the spread of the novel coronavirus. With people mostly keeping indoors, several reports have emerged of wildlife claiming empty streets across the country.

While a civet was seen roaming freely inside a mosque, a leopard was seen lying beside a median on a National Highway in Hyderabad.