Remember This Bride’s Viral Pics With Her Dog? Here’s Her Story 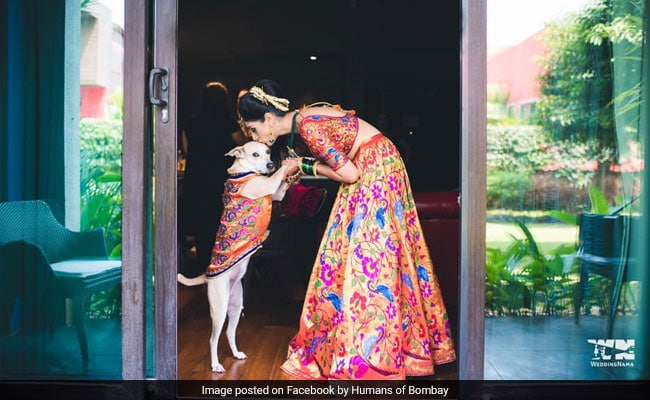 Mitali Salvi with her dog Panty on her wedding day.

When Mitali Salvi got married in 2017, it was adorable photos of her dog dressed in outfits matching the bride’s that won the Internet. Now, the canine trainer from Mumbai has opened up about her special relationship with her rescue dog, Panty, in an interview with Humans of Bombay.

“I’ve had 13 dogs in my life till now!” says Ms Salvi. “I was 5 when mom passed – they were my therapists with furry noses and wagging tails.”

Growing up, she dreamed of becoming a veterinarian, but her family opposed this “unconventional” career choice and Ms Salvi was pressured into studying engineering. She was in college when she and her now-husband, then-boyfriend Ali came across a shopkeeper beating up a puppy and rushed to its rescue.

Ms Salvi was able to fit the tiny puppy into her bag and sneak it past hostel security. “We weren’t allowed pets,” she says. “I taught her tricks so that my peers warmed up to her and smuggled her in and out of the hostel so we wouldn’t get caught.”

Coming to the quirky choice of name for her pet, Mitali Salvi says, “Once, she jumped out of a laundry basket with a bra and underwear hanging off her and came running to me. That’s how Panty pretty much named herself!”

The canine trainer and behaviour specialist credits Panty for bringing her closer to her dream career. It was during one of Panty’s vaccinations that the vet saw how well-behaved she was and asked if Ms Salvi had tried dog training. She says that it was a “lightbulb” moment for her.

“I even found a course for it, but my family refused to pay, because it wasn’t a ‘real job’. So Ali and I pooled our savings, and I went for it,” says Ms Salvi.

It has been eight years since then. Today, she has trained around 500 dogs with Panty acting as her helper. “From giving me my dream career, to being the cutest ring bearer while I married Ali, she’s been my best friend,” says Ms Salvi.

Mitali Salvi’s heartwarming post has gone viral on social media since being shared two days ago. On Facebook, her interview has collected over 16,000 reactions and hundreds of comments. On Instagram, the interview has been ‘liked’ by more than 99,000 users.

“Love your story and what you are doing for these beautiful creatures. Keep up the great work,” wrote one person.

“Thank you for telling me the story behind this beautiful pic, I had seen it a few years back,” said another.

“I remember her wedding story and the cute outfits and how she got the tailor to make them! She inspired me to do the same for our dogs! We ended up getting matching outfits at our wedding!” a Facebook user revealed in the comments section.

Take a look at Mitali Salvi and Ali Shakeer’s beautiful Goa wedding, with Panty acting as the best girl, here.