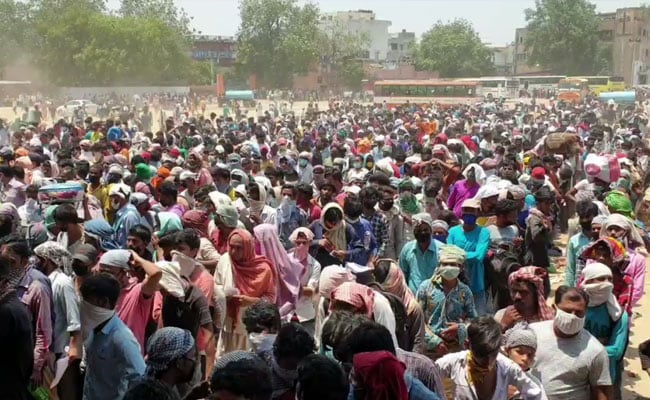 The workers had a cloth covering their faces.

A massive crowd of migrants gathered at a ground in Uttar Pradesh’s Ghaziabad on Monday to try and get on special trains to take them home.

Physical distancing was tossed aside as thousands of workers gathered at Ram Lila Maidan in Ghaziabad, waiting their turn to register themselves for buses. The buses would take them to various points from where special trains will leave for Bihar.

Photos showed a few counters where officials sat to take down details of the migrants.

In the name of caution amid the josting, the workers had a cloth covering their faces.

When it was pointed out that such carelessness could leave them exposed to the virus, one worker said: “I don’t know about the disease, but I don’t want to die of hunger.” He said he was willing to wait for hours, but he had to go home.

Another migrant hit out at the officials for what he believed was a chaotic arrangement and mismanagement.

The special trains were allowed earlier this month with distancing and other precautions to stop migrants stranded by the lockdown and left without jobs or shelter from walking hundreds of kilometres to their villages.

However, many migrants found the paperwork too tough or the fares too high.

The UP government recently ordered that no migrant should be seen on the roads or rail tracks and if they are, they should be taken to a shelter or put on a bus or train.

In Ghaziabad, the administration announced special counters to help migrants take buses to the stations from where the special trains left.

The number of coronavirus cases in India has crossed 96,000. Yesterday, the government extended the lockdown till May 31, but eased some restrictions in areas least affected by the virus.