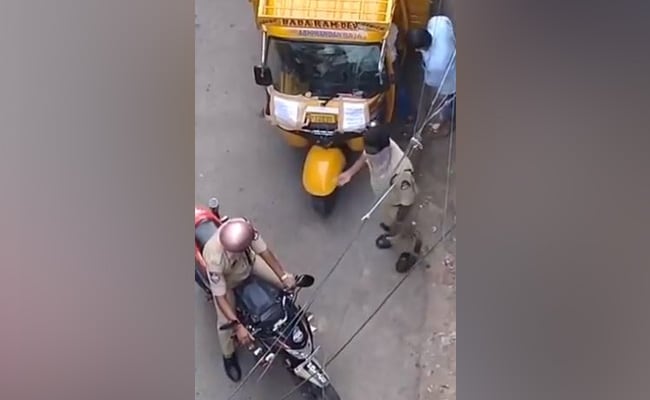 The video was apparently captured on a mobile phone.

Two policemen were suspended in Hyderabad after they were seen taking bribe from an auto trolley driver in a video that was widely shared on social media. The suspension comes as the lockdown to tackle coronavirus, which has affected nearly 67,000 people in India and killed over 2,200, enters the seventh week.

In nearly 44-second clip, two police constables – D Pancha Mukesh and B Suresh – are seen taking bribe from the driver wearing a blue shirt. He hands out the money to one of the police officers while the other cop is sitting on a motorbike. The constable who took the bribe then sits on the bike and both of them leave.

The clip was apparently shot on a mobile camera near the Afzalgunj market of Hyderabad, Telangana’s capital.

Hyderabad Police chief Anjani Kumar ordered immediate suspension of the constables as the video went viral. “Two police constables D Pancha Mukesh and B Suresh of Afzalgunj police station who were found indulging in act of Grave Misconduct have been suspended with immediate effect. Circle Inspector of Afzalganj police station has been given a Charge Memo for poor supervision and control,” he said in a statement.

The prompt action by the city police was appreciated by many on social media. “I am proud of @CPHydCity and #Telangana police. Appreciate their immediate action which would safeguard the confidence in law enforcing persons on the streets. #KCR,” wrote a user.

The southern state – that has recorded over 1,100 cases of coronavirus – is under a lockdown till May 29. “People want lockdown extended. I have informed the Prime Minister about our decision,” Chief Minister K Chandrasekhar Rao said last week.