698 Indians Stranded In Maldives Brought Back By Navy Warship 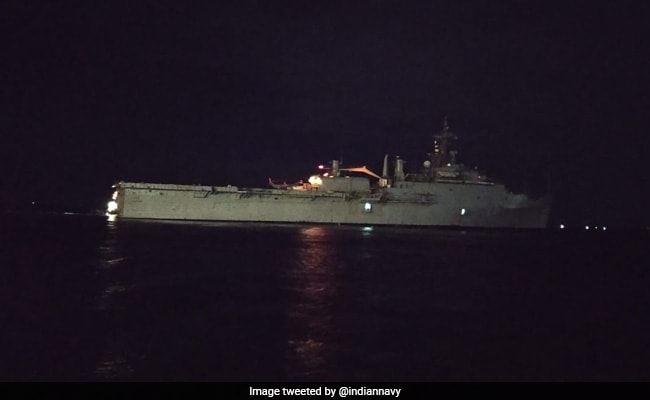 A total of 698 Indian nationals stranded in the Maldives due to the COVID-19 linked travel restrictions were evacuated on Friday from the scenic island nation on an Indian Navy warship.

“Op #SamudraSetu. #INSJalashwa set sail from #Male, #Maldives tonight bringing back 698 of our citizens,” the spokesperson of the Indian Navy tweeted.

India’s High Commissioner in the Maldives, Sunjay Sudhir. earlier expressed his deep gratitude to the Indian Navy, the Government of Maldives and its agencies for extending complete cooperation for the success of the operation.

An Indian Navy spokesman said there were a number of pregnant women and children among the evacuees who will travel to Kochi in Kerala.

Mr Sudhir said a second Navy ship INS Magar will leave for Tuticorin in Tamil Nadu on Sunday with 200 Indians. He said the exercise will be repeated next week by the Indian Navy warships.

An overall view of progress of activities & embarkation of our citizens onboard #INSJalashwa.
Op #SamudraSetu.#IndiaFightCorona#MoDAgainstCorona#SayYes2Precautions@SpokespersonMoD@DefenceMinIndia@HCIMaldives@DDNational@airnewsalerts@Portmv@PIB_India@MoHFW_INDIApic.twitter.com/FqFr7eWp4w

The first Naval ship from Male is expected to arrive at the Cochin Port on May 10, Port Trust officials in Kochi said.

The massive evacuation exercise is testimony to Maldives-India friendship, the Indian High Commission said in another tweet.
Several Indians who are travelling by the warship lauded the evacuation plan launched by the government.

“It is a very great thing that the High Commission did for us and we did not have any issues till now. We got everything with proper guidelines, all the things done by the High Commission,” Pradeep, who hails from Palakkad, said. He works in a resort in Male.