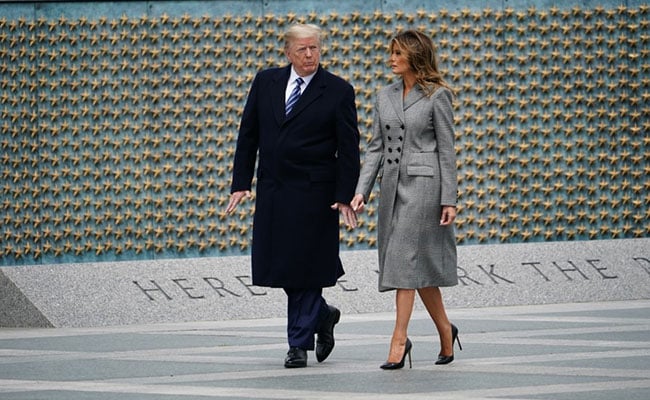 President Donald Trump evoked the coronavirus crisis ahead of a wreath-laying ceremony Friday at the World War II memorial in Washington to mark the 75th anniversary of the Allied victory in Europe.

Trump was to head to the memorial near the White House accompanied by First Lady Melania Trump, the president’s press office said.

In a statement, Trump said he was going to “celebrate the forces of freedom who defeated tyranny,” while recalling the “somber reminder of the price of freedom.”

In his statement on the anniversary, which is being marked in scaled-down fashion due to the coronavirus pandemic, Trump noted that some two million Americans took part in the war and 186,000 were killed.

“Most of these selfless and heroic warriors had never known life in a prosperous America. They grew up during the Great Depression, when America’s economic prospects seemed bleak,” Trump said on a day when new unemployment figures hit unprecedented levels, due to fallout from the pandemic.

“Today, as we reflect on the 75th anniversary of the end of the World War II in Europe, we are reminded that no challenge is greater than the resolve of the American spirit,” he said.

“Over the past months, our Nation has faced remarkable adversity during the coronavirus pandemic. But just as we have so many times before, America will triumph.”

Despite the historical bonds between Europe and the United States, Trump has used his presidency to shake up established alliances, complaining that European countries have unfair trade advantages and that US leadership of the NATO military pact has been too costly.

In November, 2018 Trump was widely criticized for failing to attend a commemoration for slain US servicemen from World War I while he visited France. The White House said that rain made the trip to the cemetery impossible.

Lions Attack Zoo Worker, Others Had To Enter Lion’s Den To Save Her

Coronavirus Could Cause $8.5 Trillion Loss In Global Output: UN Chief

US To Announce “Certain Decisions” On China On Friday: Donald Trump