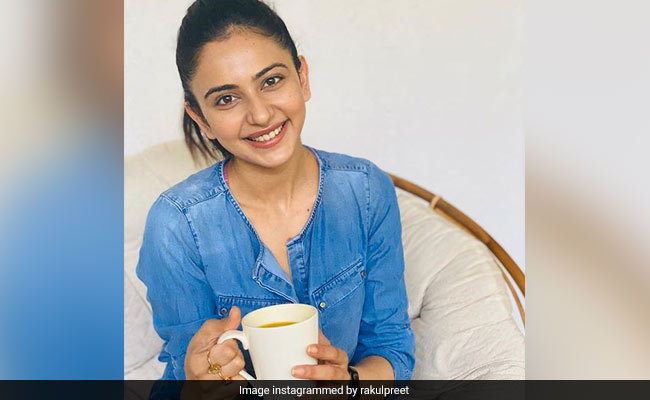 Actress Rakul Preet Singh reacted to a recent tweet shared by KRK Box Office – the verified twitter handle of self-appointed critic Kamaal R Khan’s entertainment website. Kamaal R Khan aka KRK, who describes himself as an actor-producer, is known for making random, baffling statements and his controversial tweets are mostly ignored by Bollywood celebs. Sharing a video of Rakul Preet Singh, in which the actress can be seen crossing the road outside a medical store, the tweet from KRK Box Office enquired if she was purchasing alcohol. Adding the LOL and thinking-face emojis to her tweet, Rakul wrote: “Oh wow! I wasn’t aware that medical stores were selling alcohol!” In the video, Rakul can be seen quickly making her way to the car. She can also be seen politely turning down the paparazzi’s requests to pose.

In the past, KRK is known to have been slammed by actress Lisa Haydon, Kangana Ranaut’s sister Rangoli Chandel, trolled by fans of south superstar Mohanlal and pulled up by followers of filmmaker SS Rajamouli for his absurd tweets. He was also part of a Twitter battle between Ajay Devgn and Karan Johar in 2016. In 2018, netizens were shocked when Amitabh Bachchan welcomed KRK back on Twitter after his account was suspended for a few months with these words: “The irrepressible Kamaal R Khan… straight talking, without any frill is BACK. Fasten seat belts.”

Rakul Preet Singh’s tweet comes after liquor shops were allowed to open as some restrictions were eased during the nationwide lockdown. Large queues outside liquor shops were reported in various parts of the country.

Meanwhile, here’s what’s keeping Rakul busy during the lockdown. She is eating healthy and recently busted a myth that rice could be fattening: “No, it isn’t . On the contrary it’s the easiest form of carbs to digest for the body. It heals the gut which in turn helps in better absorption of nutrients. Most importantly it’s basic food and easily available even during lockdown. So eat simple , nutritious and balanced meals and improve your immunity.”

Bored of wearing her T-Shirt the usual way, she took the T-Shirt Plank Challenge nailed it. “Was just bored of wearing my tee the normal. So, here’s a task for all of you to do… it’s like a super elevated plank, amazing for your core,” she wrote.

Rakul is also indulging in some board games with her family and her post had a disclaimer added to it: “That expression when you don’t agree to the rules of the game! PS – I NEVER CHEAT.”

On the work front, Rakul Preet Singh is best known for starring in films such as De De Pyaar De, Marjaavan and Aiyaari. She was last seen in the movie Shimla Mirchi. Some of Rakul’s popular Telugu movies include Nannaku Prematho, Kick 2, Jaya Janaki Nayaka and Manmadhudu 2.