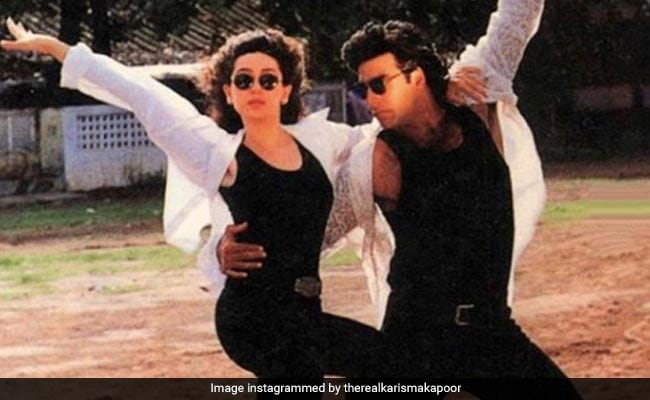 Karisma Kapoor, who has worked with Akshay Kumar in films such as Suhaag, Sapoot, Haan Maine Bhi Pyaar Kiya among others, dug out a throwback memory from the sets of… wait, she’s forgotten the when, where and why of the photo! Karisma’s Flashback Friday post, featuring Akshay Kumar, included an honest confession – Karisma said she’s experiencing somewhat of a memory loss as far as this throwback photo is concerned. “I have no recollection which film, when or where this picture was taken! But it has a great energy. Akshay Kumar, those were the days,” Karisma captioned her post. In the photo, Karisma and Akshay can be seen twinning in black and white outfits while their enthusiasm level is at max!

Take a look at this Nineties’ throwback from Karisma Kapoor’s Instagram:

In the Nineties’, Karisma Kapoor made a special appearance in Akshay Kumar’s Yeh Dillagi while Akshay had a cameo in Yash Chopra’s Dil Toh Pagal Hai, starring Karisma.

Karisma Kapoor is a true blue fan of throwback photos and her former co-stars often star in them. She also often plays “guessing games” with her Instafam, asking them to name the movies she shares throwback stills from: “Dancing around the Eiffel Tower. Hopefully those carefree days will return again very soon. Which film is this pic from?” she wrote for an on-set photo with Govinda.

On the work front, Karisma was last seen in 2012 film Dangerous Ishhq, after which she featured in special roles in films such as Bombay Talkies and Zero.