Jab Sonam Met Anand – What She Thought And Their First Pic 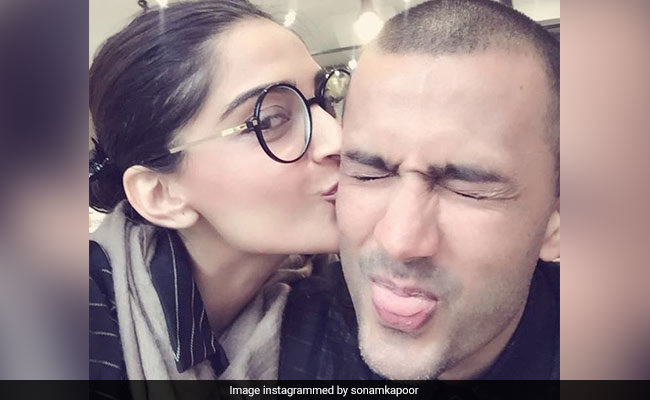 Sonam and Anand in a cute moment (courtesy sonamkapoor)

Two years ago on May 8, the celebratory sounds of Sonam Kapoor and Anand Ahuja’s big fat wedding rocked Mumbai. Two years before that on May 8, Sonam and Anand met for the first time. On her wedding anniversary today, Sonam Kapoor poured her heart out in an Instagram post dedicated to husband Anand Ahuja and also shared a priceless click – their first ever photo together! “Our first picture together… 4 years ago today I met a vegan who could do complicated yoga positions and speak about retail and business with the same ease. I found him unbelievably cool and sexy. He still makes my heart race and grounds me at the same time. Nothing compares to you Anand,” read an excerpt from Sonam’s post. Anand is the owner of fashion label Bhane and also the sneaker brand VegNonVeg.

“Your compassion, kindness, generosity and smarts are incredibly attractive but so is your moodiness and your annoying perfectionism. Thank you for being my partner and standing beside me for these four years. They have been my most fulfilling. Happy, happy anniversary husband. I’m so thrilled I get to keep you for the rest of my life. I love you the most and I know you love me the best and the most. That I promise you is the greatest gift I’ve ever received,” Sonam added but not without their signature hashtag: “#everydayphenomenal.”

Earlier, Sonam had revealed that she met Anand for the first time in London and they fell in love on the first date! Anand had first seen Sonam the big screen while watching Delhi 6 in New York.

Meanwhile, Sonam’s “almost anniversary” gift from Anand turned out to be gaming device Nintendo Switch. Early anniversary celebrations began on Thursday night with a video call with the Kapoors – Sonam is currently with Anand at his Delhi residence.