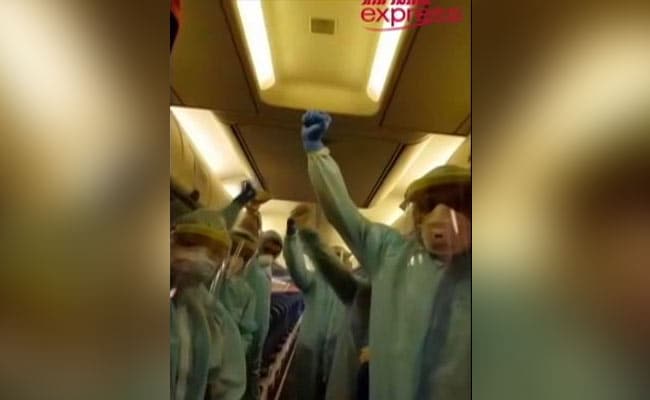 Celebrations broke out among the crew inside an Air India Express aircraft that brought Indians from abroad amid the coronavirus lockdown before it left Abu Dhabi for Kerala’s Kochi. In light blue coveralls, masks and protective plastic shields on their faces, a group of the state-run carrier’s crew is seen raising their hands and shouting “Hip, Hip, Hurray” in a mobile video taken inside one of the two special planes that later landed in Kerala late on Thursday.

“Really proud to have this flight over here,” the captain of the flight in mask said.

“Hi, I am Deepak, cabin in-charge today. Proud to be part of this flight today,” said another crew member as behind him passengers started walking to their seats.

The two special flights brought 363 Indians from Abu Dhabi and Dubai as part of India’s massive operation to bring back some of the hundreds of thousands of citizens stuck abroad due to coronavirus restrictions.

“Once again, thank you for choosing Air India Express, Jai Hind,” a crew member says in another mobile video. The rest of the crew, all in protective clothing, raise their hands and follows him with shouts of “Jai Hind”.

One by one the crew members introduce themselves.

The first Air India Express flight had taken off at 5:07 pm (local time) from Abu Dhabi for Kochi. A second Dubai-Kozhikode flight took off at 5:46 pm (local time) as part of the massive repatriation exercise named “Vande Bharat Mission” that will use passenger jets and naval ships.

All the passengers who arrived went through multi-level screenings including thermal checks. They were then seated in buses that took them to their home districts, where they were quarantined.

Pregnant women and seniors have been exempted from institutional quarantine but will have to follow strict quarantine measures at home.

The government had banned all incoming international flights in late March as it imposed one of the world’s strictest lockdowns, necessitated by the COVID-19 pandemic, leaving vast numbers of workers and students stranded.